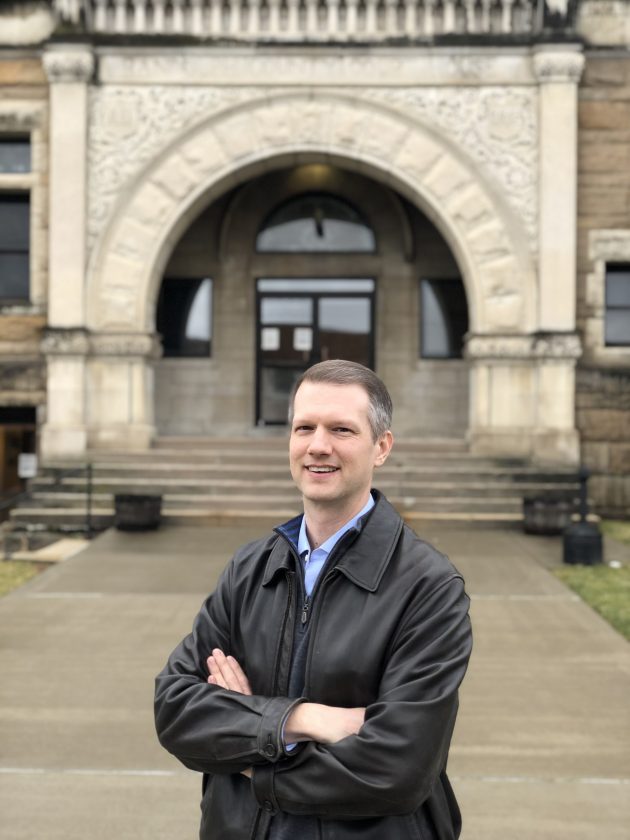 ELKINS — A former West Virginia House of Delegates Assistant Majority Whip is currently seeking election to the office of West Virginia State Treasurer against 24-year incumbent John Perdue, and visited Elkins on the campaign trail over the weekend.

“If we don’t start to grow small business here in the state, (…) we’re going to be in trouble. There are a lot of long-term threats to the success of West Virginia,” Republican Riley Moore said in an interview with The Inter-Mountain.

Moore, who represented District 67 as a delegate from 2016 to 2018, began his professional career as a welder, later attending George Mason University as an undergrad and obtaining a master’s degree in Strategic Security Studies from the National Defense University at Fort McNair and going on to work for the U.S. Department of Homeland Security, on Capitol Hill and, now, in the defense industry for Bell Helicopter, a subsidiary of Textron, Inc.

“What makes me want to be treasurer, specifically, is that I’m really concerned about the future of the state of West Virginia,” Moore said. “We’re going to have more and more of the baby boomer generation going to retire, and with those retirements, there will be an increase in the requirements and services of the state government, which means if we don’t start to grow our economy and run offices like the treasurer’s office in a more fiscally responsible manner, we’re going to be in big trouble.”

Moore said he wishes to build upon his successes in the House of Delegates on the state level, noting three major facets that he would focus on if elected to the office of treasurer: transparency, accountability and modernization.

When discussing the idea of accountability, Moore emphasized the importance of term limits in government, additionally noting that Perdue has served seven terms as treasurer over the course of the last 24 years.

“I don’t think the constitutional offices like the state treasurer, secretary of state, attorney general or otherwise should be able to run indefinitely. The governor is held to two terms; these are also executive branch offices,” he stated, noting that he thinks limits should be lowered to two terms. “I think it’s time for change in that office, and I think it’s time for new blood.”

In terms of transparency, Moore discussed the $20 million “found” by Perdue in the state’s Unclaimed Property and Banking Services funds last month.

“I really believe that, particularly on the heels of the news that the (current) treasurer recently found $20 million of taxpayer money that he’s going to turn over to the general revenue budget, that that office really needs a top-to-bottom audit,” Moore said.

“If something is found, by definition, it was either lost or hidden. That’s unacceptable, and I think we need to have more transparency in that office and better understand how our investments are doing here in the state. The state treasurer’s office manages all of the investments for West Virginia, and he claims he’s managing $13 billion. That’s a lot of money, and that’s taxpayer money.”

“I think we need greater transparency in that office to see how these investments are performing and how much money is in these accounts and start giving it back to the people that it belongs to — which are the taxpayers of West Virginia,” he said.

Moore said modernization is a substantial aspect of his vision, adding he hopes to create a program similar to the federal college savings program for those wishing to work in blue collar jobs.

“What I would do if I were elected is create what I’m calling the Jump Start Savings Plan. This is a blue collar savings plan for folks who are coming out of trade, technical or community colleges in West Virginia to be able to save for tools, equipment, certifications and licensing (tax-free),” he stated. “This is how we can try to spur small business growth and also diversify our economy.”

“There could also be benefits to labor union members as well, but I think the working middle class here in West Virginia would benefit tremendously from a plan like this.”

Moore began his campaign for treasurer last year and has visited more than 40 counties so far — including three stops in Randolph County, the most recent being on Saturday.

During his weekend visit, Moore engaged in a lunch meeting at Beander’s in Elkins and attended a Tygart Valley High School Alumni Association auction event Saturday evening to benefit scholarships for graduates.

“It was a really special night,” Moore said of the event. “I actually won a gun at the auction, which I donated back, and they were able to re-auction it and make some more money — which is great because it all goes to the kids that are graduating for their scholarships.”

“I had a great time in Randolph County and am definitely coming back several more times during the campaign. It’s a great community, and it’s always been wonderful to spend time there in Elkins and around the rest of the county,” he said. “It’s an absolutely beautiful place to be, and I’m going to do everything I can if elected to make that community, that county and our state a better place to live, to raise a family and to work.”

Moore plans to visit every county in the state during his campaign.

“I think in the state treasurer’s office, you want somebody that represents the values of the people of West Virginia,” Moore said, adding that he is “unequivocally a huge President (Donald) Trump supporter” and that he supports Trump in the upcoming election, as he did in 2016.

“My opponent supported, campaigned for and was a superdelegate for Hillary Clinton and in prior election cycles had actually supported Barrack Obama twice. I don’t think that represents our values here in the state, and I think people just need to be aware of that.”

By Brooke Hinzman, Staff Writer for The Inter-Mountain